Another Robot Bound To Run 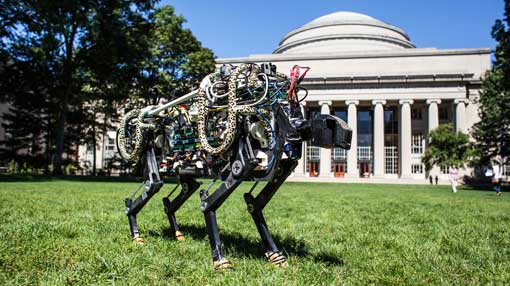 That running is something that keeps the robotics research community occupied proves another project where big steps are being made. After we reported about ACHIRES that almost walks as fast as a human being, MIT has developed a new algorithm that enables their Cheetah V.2 robot to significantly improve its walking skills.

The MIT Biomimetic Robotics Laboratory is currently developing the Cheetah v. 2, a robot that looks and acts like a cheetah.

Real cheetahs are the world’s fastest land animals, with a top speed of 60 mph. The Cheetah v. 2 isn’t quite as fast but MIT researchers were able to get their Cheetah to sustain speeds of 10 mph in an indoor track. They believe the Cheetah has the potential to hit 30 mph on outdoor, uneven grassy terrain without any external support that keeps it from falling (untethered). These indoor track tests also showed that the Cheetah could jump over a hurdle and continue running successfully. 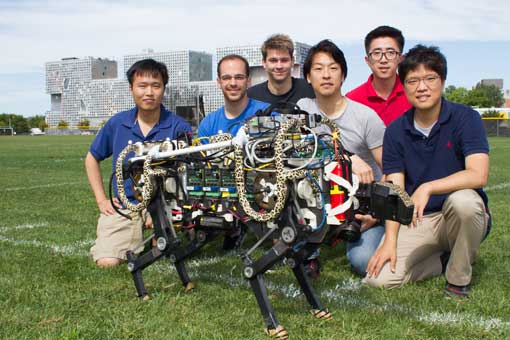 The big news is that MIT researchers have developed a special computer process for bounding that they have successfully implemented in the Cheetah v.2. Each of the robot’s legs is now programmed to exert a certain amount of force, in order to maintain a given speed: the faster the desired speed, the more force must be applied.

This enables the Cheetah v. 2 to run as fast as it does not by simply cycling its legs faster, but rather by generating more force in the fraction of a second when the robot’s foot makes contact with the ground. “Many sprinters, like Usain Bolt, don’t cycle their legs really fast. They actually increase their stride length by pushing downward harder and increasing their ground force, so they can fly more while keeping the same frequency,” says Sangbae Kim, associate professor of mechanical engineering at MIT.

The heart of Cheetah v. 2 is a custom high-torque-density electric motor designed by Jeffrey Lang, the Vitesse Professor of Electrical Engineering at MIT, with amplifiers designed by David Otten, principal research engineer in MIT’s Research Laboratory of Electronics. These contributions from Lang and Otten allow the Cheetah v. 2 to maintain balance on uneven ground without the use of force sensors.

It is said that the Cheetah v. 2 can “run” 30 mph. Professor Kim would take issue with that word choice. He would rather say that his robot bounds, meaning that the Cheetah’s front legs hit the ground at the same time, followed by its back legs. “Bounding is like an entry-level high-speed gait,” Kim says. “Now we’re able to control bounding at many speeds. And to jump, we can, say, triple the force, and it jumps over obstacles.”

Running or bounding, it is clear that the Cheetah v. 2 is fast and innovative. Similar robots to the Cheetah v. 2, like the Cheetah form Boston Dynamics, are noisy, inefficient and powered by combustion engines. The Cheetah v. 2 is much quieter because it is entirely electric: the only sound you can hear are the quick footsteps pounding the earth.