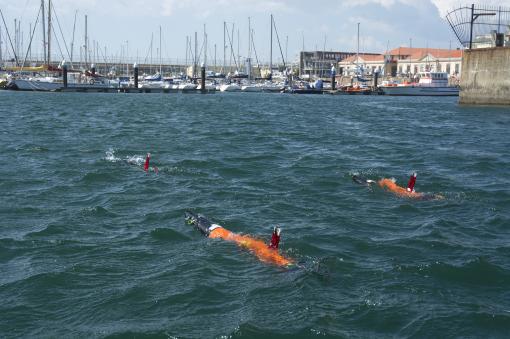 We have sent men to the moon and making plans for Mars. Research is being done looking light-years away in search of life, exploring other planets, showing detailed maps of their surface.

But what about closer to home? There is still a lot to be learned about our oceans, lakes, and rivers offering much uncharted territory just waiting to be explored.

The SUNRISE project, funded by the European Commission under the 7th Framework Programme, has developed a team of aquatic robots that are able to work together to scan the sea floor. Each robot is rigged with different sensory equipment, and interacts together to collaborate on assignments. Rather communicating via radio waves or Internet, the SUNRISE robots communicate using sound frequencies in the same way dolphins and whales do. By having robots using Swarm technology to communicate and cooperate with each other a, so-called, ‘Internet of underwater things' is being created.

What makes the exploration of the oceans different from space exploration is the way data is being transmitted. Above the surface everything is connected via radio signals and Internet, making communication efficient and fast. Especially when controlling remote controlled devices, it is imperative to be able to react on rapid changing environments.

Unfortunately radio waves are of no use underwater since the salt water will absorb and diffuse them. For this reason sound waves are being used to communicate.

But this presents its own challenges since the speed of sound is much slower than the speed of radio waves. Speed isn’t the only issue: the signals will be influenced by the "noise" made by marine life and manmade sounds like offshore drilling and ships traveling on the surface.

Creating an “Internet of Underwater Things” using sound frequencies is perhaps the biggest innovation of the SUNRISE project, and with each new trial the robots have shown to communicate more effectively, most recently working together to find a cargo container on the seafloor in 2014.

This new technology will be more effective than any previous method for discovering underwater volcanoes and archeological sites below the surface. The SUNRISE robots also offer a safe option for activities such as monitoring seismic activity and retrieving lost cargo at high depths that are dangerous for human divers.

The location of each robot, as well as the temperature and chemical composition of the water and any other data it is collecting, is sent in real-time to a command center. This commanded center is also able to direct the robots. The robots are not remotely controlled; they work mostly autonomously and respond to simple directions such as “Move from Point A to Point B”, receiving these directions over radio when the robots are on the surface and over sound frequencies when they are underwater.

“The SUNRISE robots are useful for three main applications,” explains Lino Antunes, head of the emergency department at Porto’s port operation and security base in Portugal. “First, for port security; second, for environmental monitoring, which is very important to us; and third, for inspections of the ships that dock at the port.” Antunes’s port is where the SUNRISE robots found that overboard cargo container earlier this year.

There is still mystery left in this world. But with the development of innovative new technologies like the SUNRISE robots, there is a little less mystery with each passing day.

Read more about the Sunrise Project