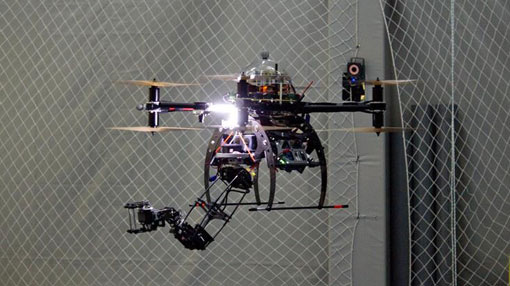 Flying robots are nothing new. A large range of these Unmanned Aerial Vehicles, or UAV’s, is already in use for a wide variety of applications. They are mostly know for taking pictures, collecting data and are being used for military purposes.

Project ARCAS, however, has developed autonomous flying robots for an entirely new purpose that features an innovative arm, which is able to manipulate objects without the help of a remote human controller.

The EU project ARCAS, which stands for Aerial Robotics Cooperative Assembly System, specifically designed them for situations and environments where it is difficult or dangerous for humans to work. They equipped their UAV's with multi-joint manipulator arms and programmed them to work together on grasping, transporting and depositing parts safely and efficiently.

The autonomy and skills of the UAV's are being developed for a host of future applications, ranging from search & rescue missions to inspection and maintenance in the energy and space sectors.

“The idea is that the robots should be able to fly in anywhere where it is impossible or impractical for piloted aircraft or ground robots to operate,” explains ARCAS project manager Professor Aníbal Ollero. Soon, pending national safety law approval, the ARCAS will be used to inspect and maintain oil and gas pipelines and electricity networks. Eventually, the ARCAS will be used to help build tall structures and even dismantle satellites and service stations in space.

The ARCAS robot flies autonomously and is programmed with 3D maps and equipped with sensors to adapt to fluid situations, such as weather changing for the worse.

10 prototypes have been tested indoors at CATEC, the Advanced Aerospace Technologies Centre in Seville, Spain. Outdoor trials have also been performed that showcase the ARCAS’s ability to grab a bar and transport it without any outside control.

“We have helicopters, and multi-rotor systems with eight rotors to give more hovering control, increase the payload and carry arms with greater degrees of freedom,” says Ollero, detailing the ARCAS’s capabilities. “The robots work very well. We still need to improve accuracy and repetitiveness in different conditions, but the results are very promising. We have demonstrated aerial manipulation with six- and seven-joint arms and perception and planning functionalities, and this is a first worldwide.”

The ARCAS project involves eight partners from five countries and is funded by the European Commission’s 7th Framework Programme. The project started in 2011 and will finish in November 2015.

Read more about the ARCAS Project