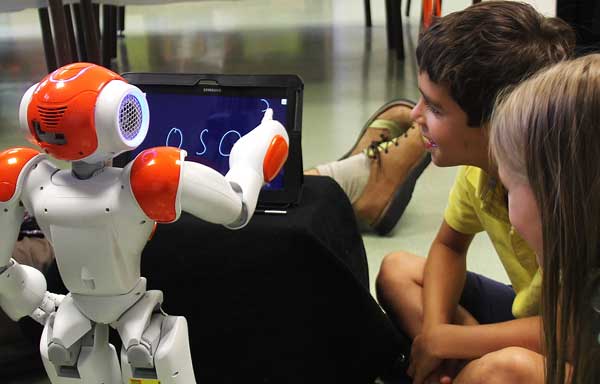 Children who have a difficult time acquiring basic writing skills often end up feeling a lot of anxiety or shame, especially if everyone else in their class is able to perform at a much higher level. Reaching these young students can become problematic for educators, and can be worsened by the fact that the rest of the class needs to keep moving forward.

Each person, however, learns differently and for some students it helps to develop new skills as a result of teaching them to others. The typical classroom environment does not often offer this possibility, but there is a new robotics technology that is poised to completely alter the way handwriting is taught. 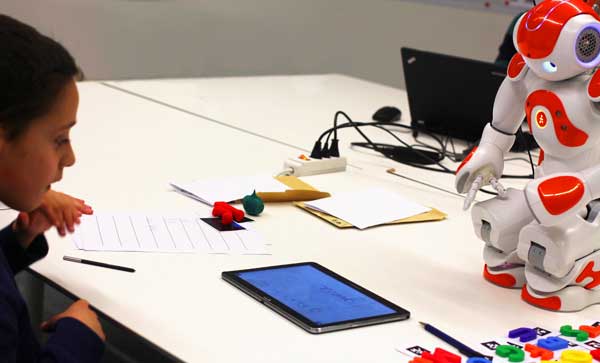 The Benefits of Learning through Teaching

CoWriter is a robot learning system that has been designed exclusively with the intention of helping children improve their handwriting skills by using a robot. This innovative technology puts children in the position of teaching the robot how to write each letter of the alphabet, which makes it possible for them to learn in a more positive environment. For this project the robot of choice was NAO, the little humanoid robot developed by Aldebaran Robotics.

Although it might seem odd for students to learn while teaching a robot instead of through direct instruction from their teacher, there are actually a lot of benefits associated with using this approach.

For example, children who have a difficult time with certain concepts such as how to correctly write the letter R, often end up feeling singled out in a negative way. This can quickly lead to self-esteem issues, and some students will end up exhibiting behavioral problems as a reaction to the stress of their perceived failure.

Kids and robots learn to write together - Video: EPFL

Instead of allowing a child to feel badly about itself, the CoWriter robot learning system puts them in charge of their own education. Essentially, the CoWriter robot is programmed with specific variables that will help the student figure out exactly what they are doing wrong without experiencing any negative feedback from their teacher. In other words, if a child consistently has trouble with writing the letter P, they will be able to see a similar mistake written on a tablet by the robot.

After this happens, the student will be given the opportunity to correct the robot’s mistake on the same tablet. Over time, the child and the robot will both exhibit handwriting improvements, which will provide some much-needed positive reinforcement.

Does the Robot Truly Learn?

The entire process has been designed with a series of algorithms that can be adjusted based on each child’s individual handwriting issues. Therefore, the robot knows the entire time how to accurately write each letter and word, but it will not showcase this ability until after the student has spent time acting as a teacher.

The entire process is handled in a fluid manner so that it feels realistic. Children do not need to know that the robot progresses due to its algorithm settings. Instead, they will be given the impression that they are truly teaching the robot how to improve its handwriting. At the same time, the confidence that they gain will make their handwriting better as well.

Another major perk of enabling children to learn through teaching is that it will help them develop the educator aspect of their personality. Every leader needs to be able to teach new information to others, so this is a very important skill that should be worked on from a young age.

As an added bonus, most kids love robots, and their positive interaction with the CoWriter is likely to enhance their appreciation of all types of technology. When you consider how important it is to embrace and utilize technology on a daily basis, it becomes very easy to understand why the EPFL development team behind the CoWriter Project selected a robot to help them connect with children who are having difficulty learning how to write.