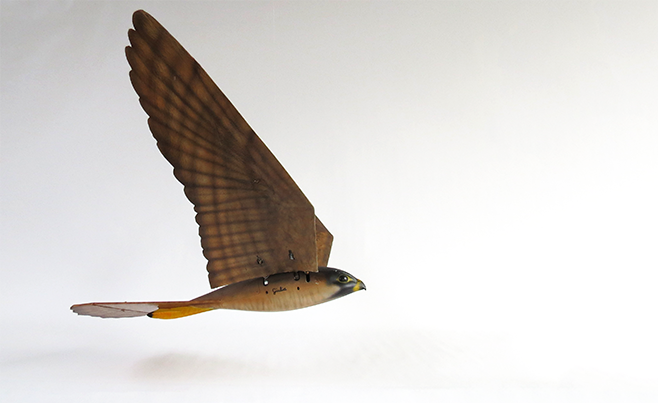 Yes, birds. Remote-controlled robot birds modeled after Peregrine Falcons. Why? To scare away other birds, a necessary practice in many industries. Airports, farms, and landfills are just a few of the facilities that could use a more effective way to scare off unwanted birds. Current methods for keeping birds away, include archaic scarecrows and military-grade flash bang grenades, but robot birds offer a durable, sustainable, and environmentally friendly alternative.

Nijenhuis, along with his robotics team Clear Flight, has already created a remote-controlled version of his robot bird, named the Robird. The trick was creating a mechanism that replicates exactly the motions a real bird’s wings make. The up-and-down motion of wings is simple to copy in a machine. More difficult to replicate is the rolling motion birds use to push wind backwards and propel themselves forwards.

“From a scientific point of view, we don’t truly understand flapping-wing flight” Nijenhuis says, detailing the difficulties of simulated bird-flight. “It’s all about very complex, three-dimensional flow. What a bird actually does is so complex that it’s incredibly difficult to mimic.”

Fixed-wing flight is easy. For the Robirds, Nijenhuis had to develop flexible wings that would deform as the wing pitched up and down. He also had to make the Robird move specifically like a falcon, because not just any bird will do when it comes to scaring off other birds. “If it doesn’t look like a predator, they don’t care” Nijenhuis explains.  “And if it doesn’t move like a predator, they don’t care either.”

Clear flight completed this predatory image with the help of a 3D printer that molds a glass-fiber body in the shape and color of a falcon. It really works: at a landfill in the Netherlands, test trials of the Robirds resulted in a 75% decrease in bird visits.

The current version of the Robird is remote-controlled. This has allowed Clear Flight to confirm their success in replicating realistically the flight of a falcon and its ability to scare off other birds. But in a workplace environment, it is not cost-efficient to hire an experienced RC pilot just to chase pests away.

This is why Nijenhuis is currently developing autonomous technology that will be used in the Robird, allowing handlers to define the flight area or draw out a pre-programmed flight path and just let fly.