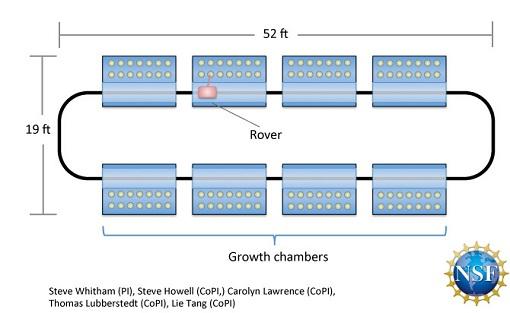 Yet another example of the advantage of using robots in agriculture is “Enviratron”, a research concept initiated by the Iowa State University in which the growth of plants under varying environmental conditions is monitored by a robot.

For this purpose, the Iowa State University is currently developing a state-of-the-art research facility which contains specialized growth chambers, separated by automatic sliding doors. Being separated, these chambers can be used by researchers to simulate different environmental conditions per chamber.

The different environmental conditions are created by controlling and varying the temperature, humidity, light and carbon dioxide concentration of each single chamber. In this way the effects of climate change on the early development of plants can be evaluated.

What sets Enviratron apart from other, similar, research sites is that the plants do not have to be moved in order to collect data. Instead, a robotic rover travels from chamber to chamber using its sensors to monitor, measure and record the performance of the plants leaving the plant undisturbed in its simulated habitat.

“The growth of plants is sensitive to movement. Trees on a coastline, for instance, grow thicker trunks because the winds batter them around,” said Stephen Howell, a professor of genetics, development and cell biology at the university and a collaborator on the Enviratron project. “With the system we’re developing, the plants never leave the chambers, so there are fewer variables introduced during their development.”

A big advantage of using this robot rover is the use of its robot arm, or “manipulator” as it is called. This manipulator is equipped with various high-quality sensors that can take readings, including collecting detailed photographic and thermographic information. The robot can use this manipulator, to automatically move the sensors into the optimal positions to get the best readings which results in high-quality data.

Another feature of the robot rover is the ability to conduct advanced analyses such as holographic imaging and Raman spectroscopy.

Initially the main crops grown and researched using the Enviratron concept will be the crops commonly grown in Iowa like corn, soybeans and biomass crops.

With a grant from the National Science Foundation funding the project, Iowa State University will build a prototype of Enviratron in 2015 planning to have a complete facility with as many as 8 growing chambers ready in 3 years.