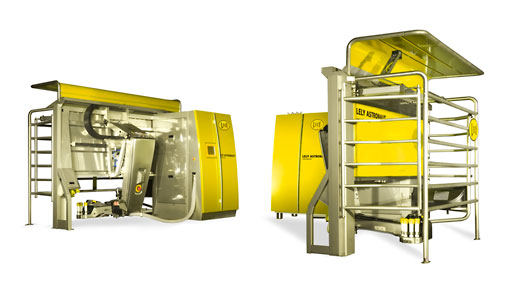 When it comes cows & milk, Lely’s current Astronaut A4 milking robot is ‘milking the market’, and the cows are loving it

Lely began establishing itself as agricultural industry leader in 1948 when the company invented the finger wheel rake followed by the Lely fertiliser spreader and the Lely terra power harrow. Near the end of the last century though Lely says “the most revolutionary invention of the century was introduced” into the milking business. That product: the Lely Astronaut robotic milking system.

At its release Lely announced that the Astronaut A4 had revolutionary new technology (or concepts) that would give their robo-milked cows “even more freedom” and give “more control for the farmer with more milk as a result.”

The most significant revolutionary feature of their latest Lely Astronaut cow box (the A4) is a new walkthrough design they call the I-flow. This new concept allows “the cow to walk straight in and out of the box eliminates any unnecessary obstacles, further reducing the threshold for the cow to enter the cow unit at her own pace.”

It is presumed that this stress reduction feature puts the cows at greater ease thereby helping assist the cow generate a greater flow of milk. There are two models of the Lely Astronaut A4; the Manager and the Operator versions. Each able to be customized to the farmers specific needs.

Founded in 1948, Lely is an international company that aims at offering innovative solutions to the agricultural field. As a family owned company, it has succeeded in providing a revolutionary innovation to the dairy business and has now more than 160 facilities covering more than 20 countries worldwide.