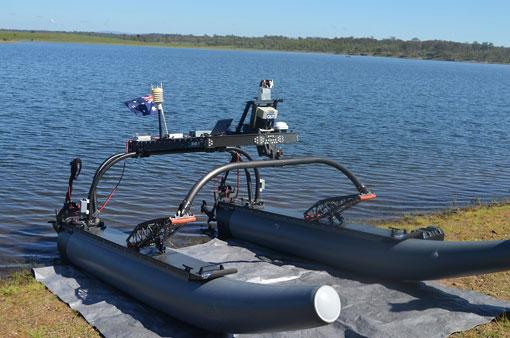 You’ve probably heard of the driverless cars being developed by Google. Well, how about driverless boats?

Students at Queensland University of Technology (QUT) have developed just that, an autonomous robotic boat. These students and their boat, named Bruce, will be competing in the Maritime RobotX Challenge, a top robotics competition in Singapore this October. At this competition QUT and Bruce will compete against the innovations of 14 other universities from around the world.

Bruce could revolutionize rough water rescue missions. Another, less dire, use: it could make fishing more relaxing than it already is, with fishers potentially not having to mind the controls of their boats due the autonomous technology used in Bruce.

Bruce is built on a pair of rubber pontoons and can seek, search, and find by using on-board sensors and cameras. Bruce was made to especially detect yellow objects, the color of most life jackets and rafts. Bruce can also recognize channel markers and navigate around buoys.

The team of students is hoping they might eventually get on the payroll of a big company such as Google to development their driverless boat, which is exactly what happened for the innovators behind the driverless car. But for now, they’ll be happy with a sponsorship that allows them free airfare to their competition in Singapore.