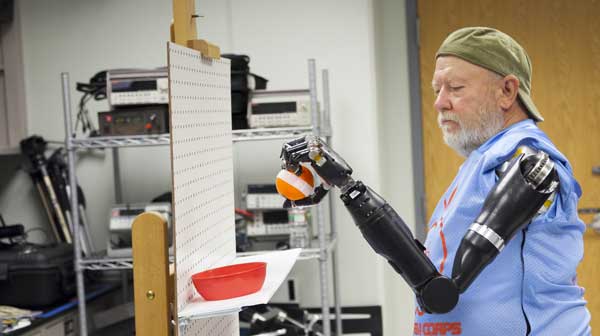 Prosthetic limbs that are controlled by their user’s thoughts are no longer the stuff of science fiction.

Les Baugh from Colorado is the very first bilateral upper arm amputee to have the MPL fully and wirelessly integrated into his body. Baugh, who lost both arms in an electrical accident over 40 years ago, first underwent reinnervation surgery. 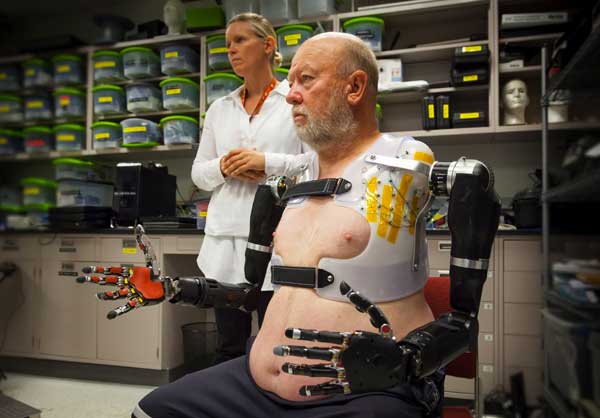 “It’s a relatively new surgical procedure that reassigns nerves that once controlled the arm and the hand,” explained Johns Hopkins Trauma Surgeon Albert Chi, M.D. “By reassigning existing nerves, we can make it possible for people who have had upper-arm amputations to control their prosthetic devices by merely thinking about the action they want to perform.”

Mr. Baugh then underwent intensive training in order to effectively use the custom-cast MPL with three degrees of motion and intuitive control.

In another MPL development related to the Baugh study, a University of Pittsburgh School of Medicine research team has fitted trial patient Jan Scheuerman with a prosthetic hand and arm that allows 10-degree brain control. In other words, the patient uses her brain to prompt a prosthetic limb into 10 basic movements -- from gripping to scooping and pinching. For context, a normal human arm has 27 degrees of freedom.

Three years ago, Scheuerman was surgically implanted with a small electrical grid containing 96 tiny contact points. Each electrode point picks up signals from an individual neuron, which are then relayed to a computer in order to identify the firing patterns associated with movements such as raising or lowering the arm, or turning the wrist.

This “mind-reading” is used to direct the movements of the prosthetic arm (also developed by Johns Hopkins’ APL). The grid was then removed and Scheuerman trained in the use of her revolutionary prostheses.

The results of this particular trial were recently published in the Journal of Neural Engineering. These recent achievements in brain-prosthetic integration represent years of scientific research and provide new hope for wounded veterans, accident victims and many others living with amputated limbs and restricted mobility.

- University of Pittsburgh School of Medicine