Robotics Made Easy With RoboCORE 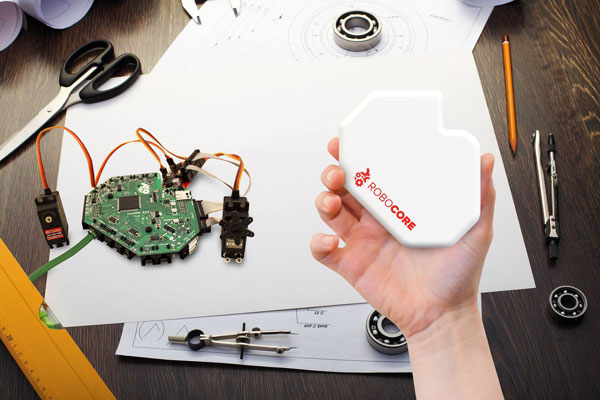 If you’ve grown accustomed to a world where robots seem like an entity that’s restricted to industry and academia, then think again. Anyone can create their own personal robot with the innovative RoboCORE.

Currently the subject of a Kickstarter campaign, this Cloud-powered DIY robotics device and development platform is for anyone, from the start-up business to the hobbyist. It may sound too good to be true, but it’s not. RoboCORE provides the hardware and software that are needed for robotic construction; all you need are the mechanics, and a lot of imagination.

Even the mechanics consideration is simplified, as the RoboCORE system does not depend on any individual mechanics system which enables a wider range of development opportunities. The idea is to make the process as simple as possible to open up the world of robotics, much as the way the world of computers opened up in 1970s and 1980s, often through individual experimentation.

What does RoboCORE hardware provide?

The system hardware is intended to be a game changer and an enabler. With RoboCORE you can:

Even more impressive is that RoboCORE attaches to the mechanics of your choice and enables you to control your robot using Web, Android and iPhone apps.

What happens after Kickstarter?

RoboCORE is an initiative of Husarion, a Poland-based technology start-up, whose founders are looking to raise $50,000 to bring RoboCORE to market.

The Kickstarter campaign is aimed at introducing RoboCORE to the world. On its completion, the system will be available as an Open Source model. The code will be ultra-simple to use, to complete your own simple robot in an hour or two.

RoboCORE also utilizes Cloud technology so not only can you control your robot from any location across the globe, but you can take a close look at the world around you from a robot point of view.

The creators of RoboCORE are appealing to everyone’s inner geek, to open a door on a world where creating a robot is not something only highly experienced people with a huge budget can do.

The Husarion company was founded in 2013 in Krakow, Poland by Dominik Nowak and Radosław Jarema, both graduates from the AGH University of Science and Technology. The company received financing from the Seed Fund of the Krakow Technology Park to begin building DIY robotics products. For more information on Husarion, visit www.Husarion.com.

For more information, check out and support the RoboCore Kickstarter campaign.