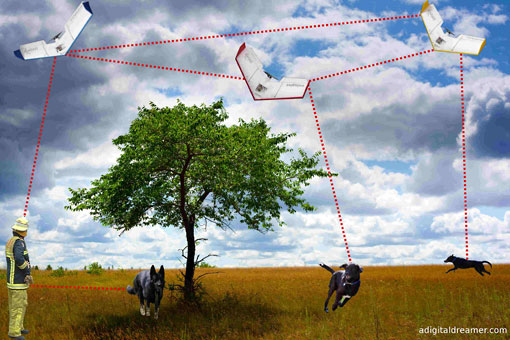 Many advances in technology were inspired by biological occurrences in the natural world. This is certainly the case with swarm technology, which copies swarm behavior observed mainly in ants and other insects.

Swarm technology is a system of many similar robots that are programmed to cooperate and accomplish a task too complicated for any of the robots to complete individually. The swarm combines all the data collected from the sensors of each individual robot to get a “bigger picture”. The robots communicate with each other to establish a cooperative system. Surveillance, mapping, tracking, and disaster management are just a few of the many possible applications for swarm technology.

IMDEA Networks Institute and ETH Zürich have signed a collaboration agreement to further research this innovative new technology. This resulted in the project SWARMIX.

The SWARMIX project will research and develop the foundation for "mixed swarms" which are swarm systems that consist of a combination of humans, animals, and robots.

The aim is to provide each component of the mixed swarm with high levels of autonomy, allowing it to be more efficient and use its individual capabilities to its full potential.

The SWARMIX project doesn’t focus solely on robot-to-robot communication. What sets this project apart from others is that it is researching new, more efficient ways in which humans, animals, and robots can communicate and work towards a shared goal. An example of a scenario that could benefit from this technology is a rescue mission where UAV’s, humans, and dogs could work together to find a missing person.

The project is financed by the Swiss National Science Foundation (SNFS) as part of the Sinergia project, which supports interdisciplinary research.