Social Robots Are Getting Emotional 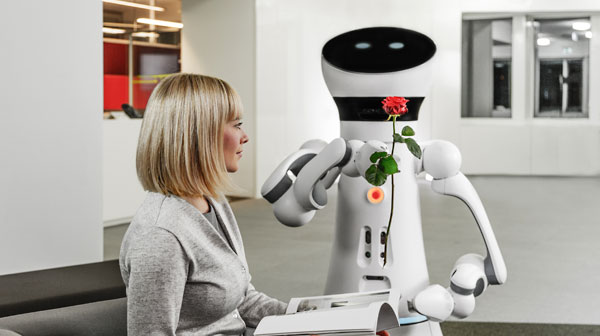 As part of a project called ACCOMPANY, researchers at the University of Hertfordshire have been working on a social robot that collaborates with caretakers and relatives to support elderly to maintain an independent life.

This type of mobile service robots can be helpful in home and community care environments where they perform simple tasks for elderly users, providing mobility support and fetching or carrying items, among other everyday jobs.

What makes the Accompany Project unique is that they are not only focusing on physical assistance but also on social assistance. By offering stimulating activities and engaging in empathic interaction, they increase social connectivity, preventing social isolation and loneliness.

According to its published objectives the project “… represents a novel technological solution to facilitate independent living at home for elderly users”.

The robot being used is the Care-O-bot 3, originally developed by the Fraunhofer Institute for Manufacturing Engineering and Automation in collaboration with British and European research institutes.

The Care-O-bot 3 is a free-standing robot companion equipped with sensors, POV cameras, gripping arms, a service tray and a detachable LCD screen/tablet interface that is capable of “learning” its user’s behavior patterns, yet is still easy to use.

It is designed to be used in an “intelligent” environment in which a tracking system and re-charging station have also been installed.

A new generation - Care-O-bot 4 – has recently reached the prototype and testing stage.

This iteration of the Care-O-bot is more sleekly designed, closer to humanoid in shape and more agile than its predecessors. It is constructed of lower cost materials such as folding sheet metal.

The Care-O-bot 4 is also programmed to be “charming”, to express emotion, to follow rules of etiquette and not interfere unnecessarily. As Dr. Farshid Amirabdollahian, who led the development team, has explained, “We introduced the notion of empathy to remove the coldness. "

Dr Ulrich Reiser, Project and Group Leader at Fraunhofer IPA explains that the Care-O-bot 4 is also programmed to always maintain a respectful distance, that it is able to show what it has understood and what it intends to do. On top of that it is able to make simple gestures and reflect emotions.

For this purpose, a set of cartoon-like eyes was developed which appear on the LCD display. The robot is programmed to use these to show expressions related to the circumstances. For example: If somebody has forgotten to take their medication, they will look sad and then the robot will explain why.

The Accompany project is collaboration between the University of Hertfordshire’s Adaptive Systems department, Fraunhofer IPA Germany, the University of Twente in the Netherlands and six other partners across Europe.

The first part of the three-year, $5.5 million ACCOMPANY project that is now concluding will also specify ethical guidelines for the use of service robots by the elderly.

Research will be made publicly available, and an open source policy will be pursued for software development in the project, thereby strengthening global service robotics research. The next stage of development, now being proposed, will prepare the way for a commercially available and affordable version of the Care-O-bot.