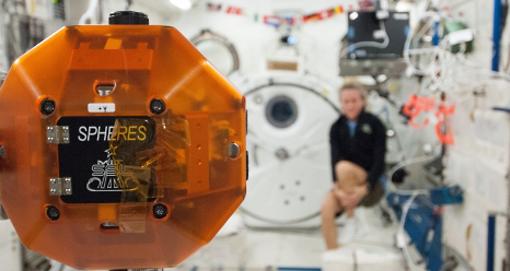 SPHERES on board ISS Picture: NASA

If you like Space Games, get ready for the Annual Zero Robotics Tournament.

Finalists in this Zero Robotics tournament will compete at the International Space Station using Spheres robots to avoid obstacles, as well as complete a specific mission that changes every year.

For the 2013 Zero Robotics Tournament Finals, the mission was to save Earth from being hit by an asteroid. The mission for the 2014 tournament will be announced in September. Since the final competition is complicated enough, teams often start strategizing for the mission as soon as it is announced to warrant the 5-6 months of prep time.

Aside from the fun and games, the competition is designed as an educational opportunity for students, who will learn a great deal about coding, math, physics, working with others, and problem solving in general.

Before making it to the final round held on the ISS, teams must first complete a series of online simulations. The simulations are free of charge and increase in difficulty as teams advance through the rounds.

Teams with the highest scores in the final round of simulations earn a place at the ISS competition, which for the 2014 tournament will be held in January 2015 and officiated on site by ESA astronaut Samantha Cristoforetti.

The 4th Annual Zero Robotics tournament will be registering competitors from July to September 2014. High school students from the United States and European Space Agency (ESA) member countries are eligible for registration.

For the ISS competition, American teams will gather at the Massachusetts Institute of Technology and European teams at ESA’s Technical Centre, ESTEC, in Noordwijk, the Netherlands.